If you have never been to Austin Food & Wine Festival, I highly recommend making the trip and trying it out. I was able to attend this year with the Texas Beef Council and it was quite an eye-opening experience. There were so many different types of food and so many things that tasted so GOOD! One of my favorites had to be the pork and waffles. Yes! You read that right…… it was delicious! My reason for being at the Festival was even better. 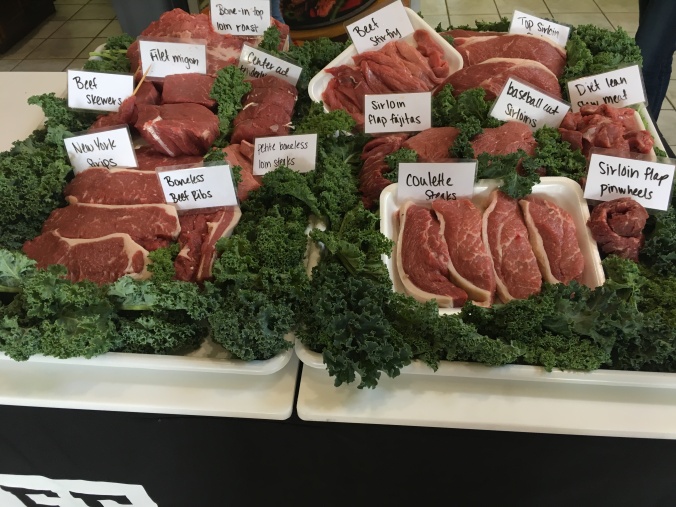 This event is a brand-new event that the Texas Beef Council sponsored and we were looking for the “Best of the Best” Butcher in Texas. Not only were we able to showcase butchers and their amazing talent, we were also able to shed some light on the industry. All of the activities help consumers become aware that butchers are still out there and they are a very important part of the meat business. 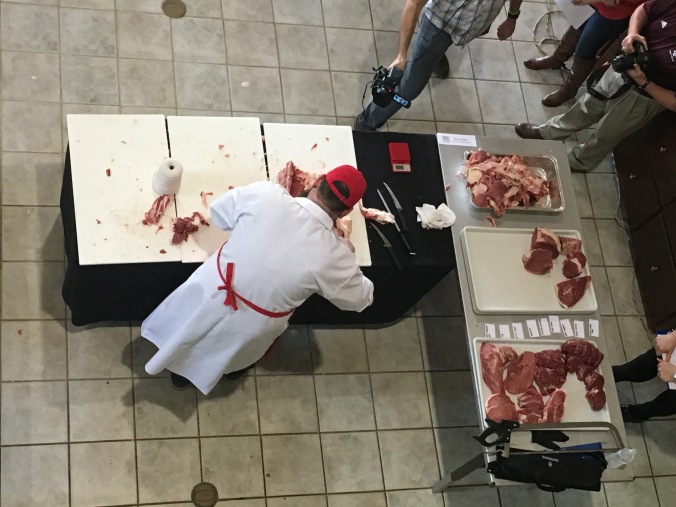 This contest started back in March where we had three regional semifinal rounds. These rounds took place in Houston, Dallas, and San Antonio. At each of the rounds, there were four to five contestants competing. For the competition, the contestants were first given a whole shoulder clod and a top sirloin with a time amount of thirty minutes to break the meat down with cuts that they would merchandise in their store. These were cuts that would fall into the full service and self-service case. This was very interesting to watch as each competitor did different cuts because of the different types of cuts their clientele ask for. For the second part of the competition, they were given a wide range of cuts that had been laid out and then they had to properly identify the cuts. For the last part of the regional, they were given a whole strip loin and had a small amount of time to cut out ten 12oz strips that were cut to order. The contestants had a scale that they could use to weigh them if needed, but the ones that were weighed could not be counted. This was remarkable to see how many actually hit 12 oz. exactly.

The top winners of each regional moved on to compete in the finals. The finals were a two-day competition and took place here in Austin at the Texas Beef Council office and at the Austin Food & Wine Festival. The top three contestants were; Michael Majkszak from Majkszak Meat Market, Shawn Knowles from Old Town Market, and Bryan Butler from Salt & Time Butcher Shop. These contestants had already won $2,500 at the regional events but they were competing for $5,000 and the title of Best Butcher in Texas.

For the final competition, the contestants were given a full loin and had an hour to break this down to cuts that they would merchandise to their customers. This part was done at the Texas Beef Council office, where they also had to have an interview done as well. At the Austin Food & Wine Festival, the contestants were given a 103 Rib or a bone-in ribeye and they also had to break this down into cuts that they would sell to their customers. Each time this was done they had to explain to the judges exactly why they used those particular cuts versus other cuts. Once again, the contestants did a wide variety of different cuts all based on their clientele. It is pretty amazing to watch them in action and if you have never seen it before, I suggest finding some way to watch. It truly is a work of art!

So, who won you may ask? Well, while all of the contestants are winners in my book, the best butcher is Texas is Bryan Butler from Salt & Time Butcher Shop. If you are in the area of any of these butcher shops, I suggest you stop by and meet these gentlemen, they are truly great at what they do! In the meantime, support your local butcher shop!

Psalm 46:1 “God is our refuge and strength, an ever-present help in trouble.”

One thought on ““The Rarest of Them All””